It was quite the slow year for Polygons and Pixels in 2016. I only published 4 articles total. This has been my slowest blog since I created it, but it’s still surprising.

Besides the homepage, the top articles include topics such as Castle Doombad, World of Goo for Android, “bob’s game,” Lifeline, and Papers, Please. I got more visits from the US by far, but following the US are Brazil, UK, Germany, and France. Thanks!

Here are the views by year:

I didn’t do much serious gaming in 2016. I played a lot of Hearthstone, Overwatch, and some World of Warcraft: Legion. I tried Lifeline 2 and was disappointed. The only console game I played was BattleBlock Theater, which I finally beat. I also played a couple storylines of Hatoful Boyfriend after my friend, Tram, suggested it. I played a ton of Sailor Moon Drop, Dragon Mania Legends, and Pokemon Go. Super Mario Maker got a little playtime (and blog posts) as well. KOMRAD finally was released for iOS, and I played that. If you count party games, Jackbox got a lot of play. In December, I started playing Ingress at the suggestion of my friend Chuck. Finally, I downloaded Super Mario Run and tried to resist paying for the full game. I lasted two days. 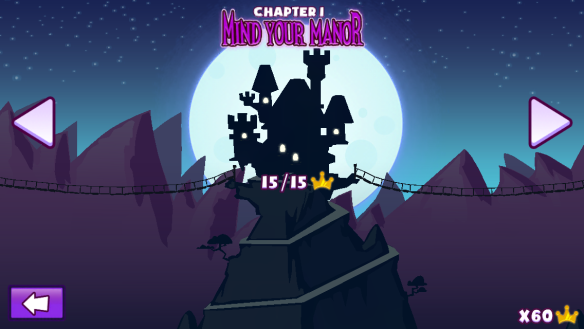 When my friend Joe told me about Adult Swim’s new iOS game, Castle Doombad (developed by Grumpyface Studios), in February, I immediately bought it. I’m a fan of some of their previous games, so I was excited to play this new one. I don’t intend this post to be a formal review, so I’m not going to worry about going into too many details on the game. However, it’s a tower defense game in which you try to protect your captured princess from heroes. You can beat a stage by ensuring a hero never rescues the princess, but you can also crown a stage by keeping a hero from ever reaching her. You earn currency in the levels and can use it to purchase new traps or upgrade current ones. In addition, there are thirty tasks called “TO-DOOMS” that reward a second type of currency, used for powerful abilities.

Here you can see that I crowned every stage in the first chapter.

And here I crowned every stage in the second chapter.

Every good game needs an endless mode, and of course, I played that too.

The Summer Slaycation update introduced a new chapter. In this one, there are two princesses you need to protect. I crowned every stage here too. 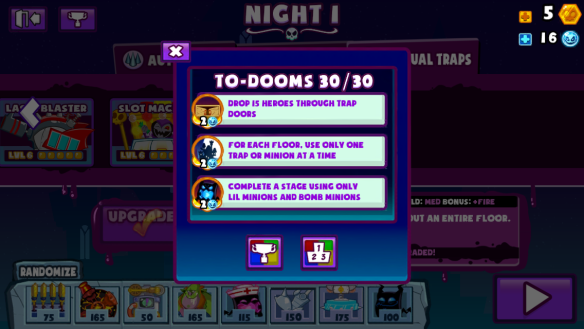 I had to ensure all my to-dooms were to-done.

If all the levels were complete, I didn’t really need to make my traps more powerful, but I did manage to unlock and upgrade every trap… 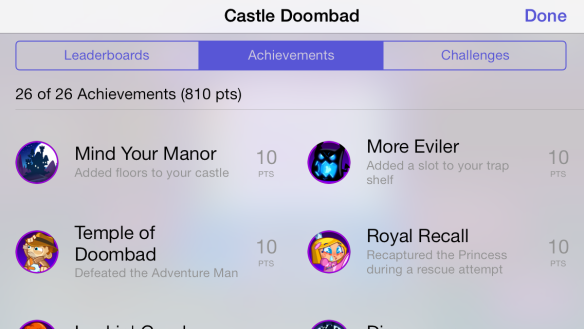 …which means that I earned every achievement.

I couldn’t help myself. I bought games in February. I have so many games to play that I know I shouldn’t, but then I always do anyways. My current backlog is at 338 unbeat games, 284 of which are unplayed.

World of Warcraft: Mists of Pandaria

I don’t like to talk about WoW too much here since I have a separate blog for it, but we did manage to defeat the Paragons of the Klaxxi last month, putting us at the final boss of the expansion.

In Cataclysm content, I got through Silverpine Forest on my warlock.

I’m not sure if you count this as playing, but Twitch Plays Pokemon did take up a decent portion of my gaming time in February! If you’re unfamiliar, you really missed out. Basically, it’s Pokemon Red, but the emulator’s inputs were tied to chat inputs over Twitch. Effectively, everyone was in control at the same time. In the screenshot, you’ll notice people saying “anarchy” and “democracy.” If enough people vote for democracy, it changed into a mode during which it only took input periodically based on what was the most common. It was used to get through puzzles, but usually the game was in anarchy mode. Anyways, it was incredibly fun to watch, and the lore and content that was created by fans along with the game are what really made it amazing.

I continued playing Poker Night 2 last month, really getting into the swing of things. I unlocked everything and got every achievement save one – the achievement for having a net $1,000,000. I’m not sure if I’m going to get that or not. I marked this game as beat.

I purchased this Adult Swim iPhone game at my friend Joe’s suggestion and have been enjoying it. It’s a defense title in which you set traps to stop heroes from rescuing the princess in your tower. It has three level packs, and I’m in the last one.

Here’s another Adult Swim iOS game that I purchased in February. I loved MAMC, and the Super version is similar. Instead of going as long as you can, there’s a time limit. The other big change is that there are power-ups you purchase for coins, and you can buy coins as IAPs. Unfortunately, I don’t like it as much. I feel like I’m not going to get a highscore without the good power-ups, but if I don’t have the coins, I have to grind.

This one’s free, so while it’s a new game I started playing, at least I didn’t have to spend money on it. It’s just doing trivia against random people or your friends in a variety of categories. The game tracks your win rate versus each person, and you can level up by playing. It’s pretty great, especially because there’s a huge amount of categories. I marked this game as beat.

I have no idea why I’m still playing this. Someone stop me.

Professor Layton and the Unwound Future

I continued playing this just a tad. I got stuck on a puzzle, so I had to skip it. I feel terrible.

Wii Fit saw a little bit of use but not as much as January.

This is still a fantastic game, and it’s a great way to fill a little bit of time.

I’m still playing this one too in my free time. I’m in the second case.

AVSEQ is an interesting game that I decided to try from my backlog. It combines music with gameplay, but the game itself basically consists of chaining together atoms of a particular color. Connect all the red, detonate them, then connect all the blue, etc. It looked fun, and I enjoyed trying it, but after playing it the one time, I’m done.

Cause of Death Volume 2 – The Connoisseur

I was near the end of the volume as February started and quickly beat it. Good stuff! I’ll probably move on to volume 3 in the future when I have less things on my plate.

Here’s another game that I played a little but not much. I’d like to play more. It’s fun with my friends, but they play on Friday nights, and I’d rather go out if I can.

pid is some sort of platformer that looks cute on Steam. I picked it up because it was, for some reason, free, but I haven’t played it.

I found this in my Steam library. What is it? No idea. I have no memory of picking it up, and it wasn’t in my backlog.