Speed Dating for Ghosts is a dating sim and visual novel in which you’re, as you might guess, a ghost. 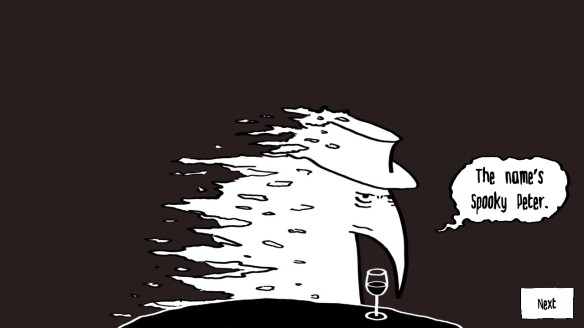 I like Spooky Peter because of his name! Unlike most dating sims I’ve played in the past, Speed Dating for Ghosts doesn’t involve a long campaign in which you choose a single partner over the course of the game. In this game, you’ll end up on a date after a few minutes of playing. Afterwards, you can return to the speed dating location and choose to go on another date.

Speed Dating for Ghosts is definitely a little out there compared to similar games. It’s less about romance and more about companionship, loneliness, and self-discovery.

Plus in the DLC, you meet a dog! Oh, and you also meet a demon and the ghost of a vampire. Speed Dating for Ghosts was funny but frank about death, and I really enjoyed it. It’s available on PC, Switch, and iOS, and it was under $10 when I bought it on Switch. It looks like it’ $5.24 right now. I recommend it!