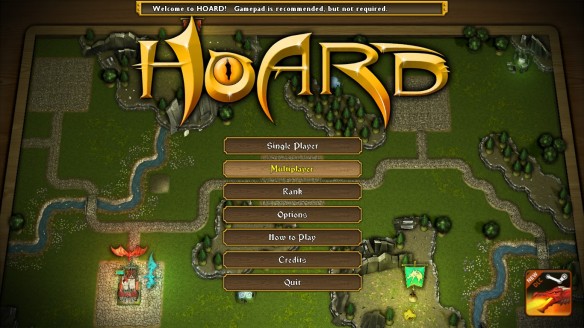 This piece was originally published as a review on Game Boyz on 5/31/11. Each Game Boyz review is structured with sections for introduction, graphics, sound, gameplay, and conclusions. Hoard was reviewed using two downloaded copied provided by Big Sandwich Games. The game got little-to-no attention but was quite fun! 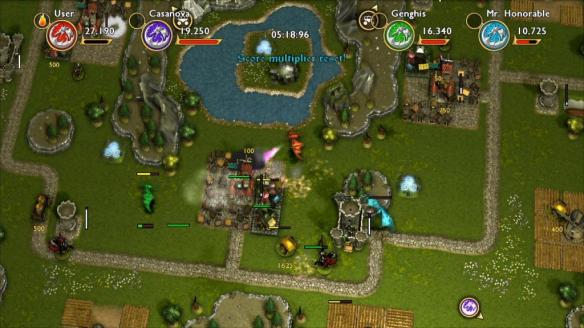 Big Sandwich Games recently provided me with two copies of their awesome new game, Hoard. To understand Hoard, I’d like to consider an RTS game. Villages grow and become cities while farms increase in size to feed the villagers. Carts of gold travel along the roads. Castles rise, training knights to eliminate the dragons the terrorize the country. Now consider controlling the dragon.

Hoard features a colorful, fantasy look. Maps look like they are placed on a wooden table. This drives a feeling of fun over realism. Multiple tilesets are included, giving you the ability to change the feel of the maps. The world is sparse and simple. While this makes the background a bit too plain, it makes aspects of the world you can engage really pop. While the graphics won’t win any awards, they set the tone and mood of the game well.

Your health and carrying capacity, two very important statistics, are prominently displayed over and under your dragon. This allows them to be seen easily at all times. Your fire-breath on the other hand, which is also an important statistic, is displayed at the top of the screen along with your dragon’s color and score. Because it’s out of the way, it’s hard to keep in mind. Of the three, it’s the least important to see at a glance, so I understand the decision, but I wish I could see it more easily. Keeping it out of the way, however, also keeps the interface uncluttered so you can keep a good view on the game.

The music and sound effects work very well in Hoard to set the mood. The music is simple yet exciting, giving that extra drive in competitive matches. The cheerful, light-hearted sound effects contrasts with the music wonderfully, reinforcing that the game is about fun even when you’re trying hard to win. I especially love it when the princesses call for help or cry out. It really adds that goofiness into the game. 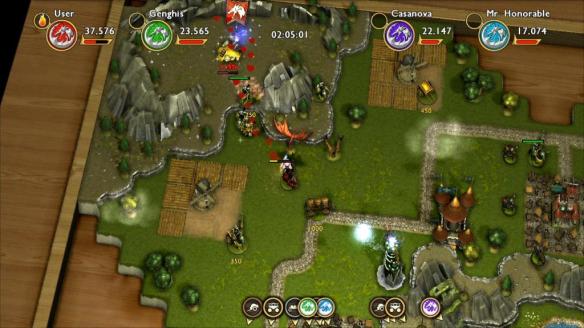 The goal in Hoard is simple – collect the largest amount of gold to win. The primary way to gain goal is to burn villages, farms, and gold carts and carry the gold back to your hoard. There is some strategy to this though. Letting towns and farms grow bigger will yield larger hauls. Do you want to destroy the towns quickly to maximize your gold early in a match, or do you want to let the towns grow a little, giving you more gold but sacrificing progression at the start of the match? It’s hard to decide.

In matches with multiple dragons, if you deal enough damage to villages without destroying them, they’ll become fearful of you. Once they reach this state, they will periodically bring carts of gold straight to your hoard. To keep them doing this, you’ll want to make sure no other dragon deals more damage to them, otherwise they will become fearful of the rival dragon instead of you!

Thieves will also visit your hoard, attempting to get away with your hard-earned (or hard-stolen, I suppose) gold. If you can get back to your hoard in time, you can kill them before they make it away. Mage towers will periodically rise in the land, attacking you with magic. Destroying them causes a gem to appear worth a large amount of gold. Similar to villages, if you leave the mage towers alone, they’l grow more powerful but will drop more gold. Letting them live can be quite the gamble, however, because too many can prove too much to handle. Another fun way to make gold is to kidnap princesses. Once you return to your hoard with a princess, you’ll have to keep those pesky knights away for a preset amount of time in order to collect your ransom. 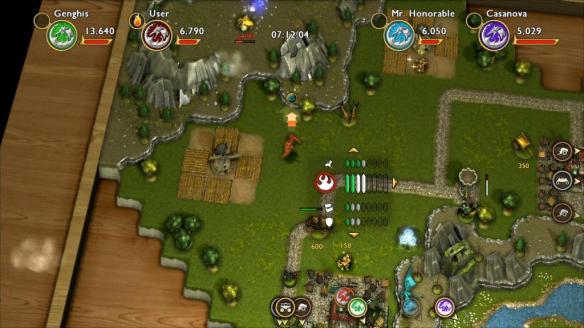 You can only hold a set amount of gold before needing to return to your hoard to drop it off. You also replenish HP when at your hoard. Gold also acts as experience; when you collect enough gold, you gain a level and can increase your stats. You have four stats that can be raised – speed, fire-breath, carrying capacity, and armor. What you raise first can really change how you play at the start of the match, leaving this a great example of the complexity of strategy inherent in the game.

Hoard features four different game modes. In the Treasure mode, which is the primary mode, you must collect the biggest hoard of gold to win. Princess Rush tasks you with kidnapping the most princesses. In Hoard (survival), HP doesn’t replenish. Instead, you’ll need to kidnap princesses to regain health while attempting to survive as long as possible. Finally, in Co-op you share a gold hoard with the other dragons! Hoard doesn’t have a campaign or story mode at all. All the modes are played in short skirmishes either alone, with AI-controlled dragons, or multiplayer! 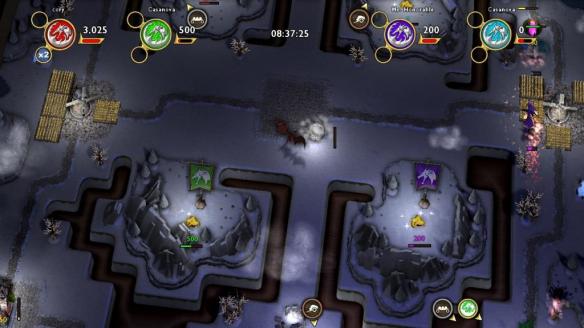 Hoard is a fantastic game because of the complex strategies available that have been boiled down into 10 minute chunks of gaming. Multiplayer is a great way to spice it up, but AI dragons provide fun when no one’s aound with whom to play. While it lacks any kind of campaign mode that can give that “ahh, I’ve beat the game” moment and feeling, it’s great because you can play as many rounds as you feel like playing, and it’s always a bit different. Similar to how multiplayer, arena-based first-person shooters contrast story-driven first-person shooters, Hoard fulfills the same relationship with story-driven real-time strategies. Hoard is a complex RTS dressed up as a tabletop, miniatures wargame and served in small portions. It’s $10 on Steam and definitely worth the pricetag.