This piece was originally published as a review on Game Boyz on 2/13/15. Each Game Boyz review is structured with sections for introduction, graphics, sound, gameplay, and conclusions.

Peggle Blast for iOS is the latest game in the Peggle series by Popcap, now owned by EA. Peggle was a minor addition to the Orange Box that ended up being a pretty big deal to me. The mechanics were simple, but it was so addicting and fun! I went on to play Peggle DS, which contained Peggle and Peggle Nights. There was even an addon to play Peggle within World of Warcraft. I skipped Peggle 2 because it wasn’t released on mobile platforms, but I was ready for more. I purchased the iOS port of the original Peggle as soon as it was released. I paid a flat price, and I received a game that I could play. It was a good deal. Peggle Blast, on the other hand, is completely free! Good deal? No, pretty bad deal actually. While I’d be more than happy to pay for a new Peggle, Peggle Blast does the typical microtransaction mechanics of having time-locked aspects that can be unlocked immediately for real money. You can buy power-ups for real money too, and it certainly feels like the game pushes you to use them. But I’ll get into that shortly. The graphics and sound haven’t really been improved in Peggle Blast, but the series didn’t need improvement in this regard. Colors are bright, the Peggle Masters are cartoony, and the music supports the graphic style in its cheery way. It’s just fine in presentation.

Let’s start with the good, shall we? At it’s core, the gameplay is much the same as previous Peggle incarnations, and that’s a good thing. Line up shots, watch the ball bounce around pachinko-style, and use power-ups. Not everything is the same old same old though.

There are some new mechanics that are quite fun and add some new, interesting challenges to the game. One I particularly like is sludge-covered pegs. These halt the ball’s momentum. That can be bad if you don’t want your ball to stop, but it can also be used to control your shots. Another feature are eggs; some levels task you with breaking eggs open by hitting them multiple times. If the egg falls off the bottom of the screen before you break it open, you lose, but if it falls into the bucket, it’s saved. There are also levels in which you need to collect gems. These objectives add new life to the series. They’re a welcome addition and quite fun.

Unfortunately, everything’s not great with the new Peggle. First, there are now lives, and I don’t mean the multiple balls you get per level. Each time you lose a level, you lose a life. Lives recharge, but if you run out of them, you can’t play until at least one recharges – or you purchase more. This can be pretty annoying, because it means that while I might be in the mood to play more Peggle Blast, I have to wait. On the other hand, I’m the type of person that always has a lot to do. I don’t really find myself bored, so it’s pretty easy for me to switch to another task.

Sadly, it gets worse. You have to wait for lives to charge, but you also have to wait hours to unlock a world after you complete the levels leading up to it. At least with lives you’re forced to wait only when you run out of lives by losing. By gating additional levels behind a time delay, Peggle Blast is punishing the player for completing levels. Again, you can pay money to skip the wait. 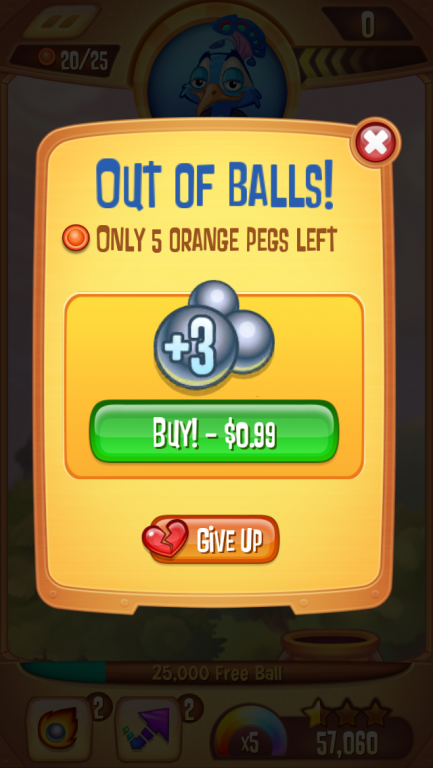 Peggle Blast prompts you to spam your friends too, but I avoided that. There’s still one more problem though. You can purchase power-ups. Anyone familiar with the phrase “pay to win” probably understands the problem here. Peggle Blast is designed with being able to purchase power-ups in mind. The levels get insanely hard, and the difficulty in many later levels depend more on chance than skill. Peggle Blast is significantly more difficult than previous iterations of Peggle, and I have a feeling it’s because EA wants us spending money to overcome those challenges. One new mechanic I didn’t mention earlier were bombs. They need to be hit in a certain number of turns or the explode, causing you to lose unless you purchase additional time. And how about boss battles, in which you must score more points than the Peggle Master competing against you? It doesn’t sound too bad except for the fact that they’re basically multiple stages in one. If you lose on the final stage, you’ve lost the whole level and have to start again (or you have to pay for additional balls).

I was willing to watch video advertisements for power-ups, but I refused to spend any money on the game. That’s unfortunate for EA, because if the game didn’t have any pay to win features but simply had a static cost, I would have gladly purchased it. Yes, I had to let my lives recharge, and yes, I had to stop playing for hours (eight, I believe) each time I got to a new world. Some levels I played over and over, waiting for the lucky shot that would let me win. It took me a long time and many attempts, but I finally beat the last level. Well, let me save you some trouble: you don’t get anything for beating the game. I don’t mean no credits, and I don’t mean no cutscene. I mean nothing. After beating the final level, I was shown the level select screen. It didn’t even indicate that the last level was completed. Thinking it was a bug, I even beat it a second time. Nope, nothing registers. Thanks a lot.

EA has taken a great franchise and buried it in unfair difficulty to push microtransactions. It’s sad, considering Peggle Blast introduced new, enjoyable mechanics. To be fair, I did have some fun with it. I didn’t beat it for review purposes; I beat it because I enjoyed playing it. However, I put up with a lot to get that little bit of enjoyment out of it. I can’t recommend Peggle Blast, and it seriously hurt Popcap’s reputation with me.

I am MrDevee on Apple’s Game Center and @TheUser on Twitter.