Lifeline is a piece of interactive fiction released on iPhone and Apple Watch recently by 3 Minute Games. It’s told entirely through incoming text messages from Taylor, an astronaut who crashes on a far away moon. You shape Taylor’s survival by choosing one of two replies whenever he or she (the game doesn’t specify) asks you a question. It tells a intriguing story through a very interesting method. 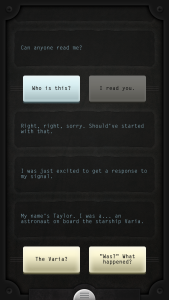 Sometimes Taylor just wants to chat, but other times Taylor asks something more important. Once I was asked if a certain amount of radiation was safe. Taylor asked me to look it up. I did, and I gave my answer, helping Taylor to survive that night. Other times the choices are less significant. Taylor nervously jokes like a real person might, even acknowledging the absurdity, and sometimes just asks which way you think he or she should walk.

It takes Taylor real time to do things too, which helps makes the game feel like Taylor’s someone with whom you’re actually communicating. If Taylor says it’ll take an hour to walk somewhere, you’ll have to wait an hour to hear what happens. This isn’t like those terrible Facebook games that make you pay to boost through an artificial delay; these delays add to the story. In addition, there’s no in-app purchases, DLC, ads, or anything else unsavory. You simply buy the game for $2.99 and enjoy it.

In addition to touching a notification to jump into the game, you can also choose a reply directly from the notifications and even from the lock screen. This isn’t always perfect, because if you missed a lot of messages from Taylor, only the most recent handful will be displayed. Your choices can sometimes be cut off too, but it’s still pretty neat to be able to do that. You can start there and if you need to click through, click through.

As a fan of both interaction fiction and sci-fi, this was pretty perfect for me. The story was more interesting than I expected as well. It was $2.99 well spent.