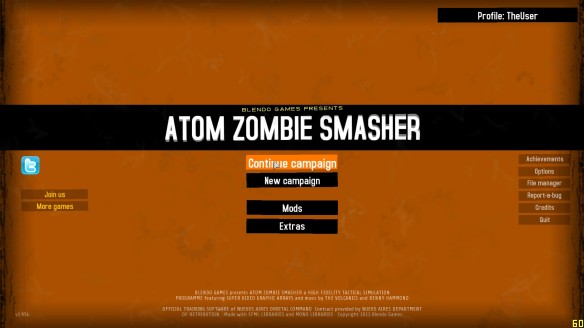 Atom Zombie Smasher is an interesting little real-time strategy game I played recently. You run a country’s military as it’s being overrun with zombies and must attempt to rescue civilians and fight back the infected.

There’s sort of two main spheres of strategy. First, there’s the map of the country. It’s procedurally-generated, so the game’ll be a little different each time you play. To beat the game, you need a certain number of points, and one way you earn points is by controlling territory. Your map shows you what territories the zombies have taken and what territories you’ve fully cleaned. Each day, which is basically a level, has different soldiers available. You need to decide when to attack each territory considering the state of the board, how strong the enemies are, and what soldiers you have available.

During a battle for a particular territory, you’ll have differents tools as your disposal with a variety of victory conditions. In this level, you can see purple infected, yellow civilians, and blue scientists. Scientists are basically currency for addition unlocks. Along the bottom, you’ll see the tools I have – a helicopter to rescue civilians, explosives, blockades, and snipers. What I really like is that you’re always given the option of trying a level again before continuing, even if you succeed. Sometimes I win but think I can do better.

You can set up games of varying lengths dependent on the number of points required for victory. A long campaign can be quite complicated, but you can also make a short campaign capable of being finished in under hour. It’s definitely a fun little game!